Useful, if Controversial, Book on Bhagat Singh, his Life and Times 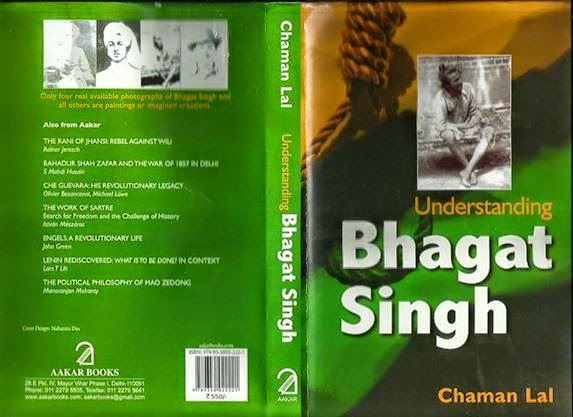 Monday 1 December 2014, by Chaman Lal
COMMUNICATION
Though I am a life member of Mainstream, I miss some issues due to the postal department’s negligence and carelessness or receive back issues many weeks later. So I missed the September 27 issue and just saw it on the website. I was both happy and shocked to see the review of my book, Understanding Bhagat Singh, by  Barun Das Gupta (“Useful, if Controversial, Book on Bhagat Singh, his Life and Times”, pp. 29-30). I respect Barun Das Gupta a lot. Happy as I was waiting for its review in Mainstream and it came out on the occasion of Bhagat Singh’s birth anniversary, I was shocked because my reference to Baikunth Shukal, rather martyr Baikunth Shukal, got misinterpreted by the reviewer,  even though the fault lies in the printed version of the book. I must make it clear at the outset that I never considered Baikunth Shukal to be among the seven approvers. He earned martyrdom by shooting one of the approvers, Phanindernath Ghosh, for which he was executed. I had made only a passing reference to Baikunthnath Shukal while reviewing historian V.N. Datta’s book,Gandhi and Bhagat Singh, where I had mentioned: ’There were seven approvers in the case, out of whom Phaninder Ghosh was murdered in Bihar, and Baikunth Shukal was executed....’(p. 106), as quoted by Barun Das Gupta. I admit and apologise that this sentence can give the impression of me putting Baikunth Shukal into approvers’ list (on which the reviewer has built the argument). But the fact is that there is a flaw in copy editing. What I had written was Baikunth Shukal was executed for murdering Phaninder Ghosh and thus attaining martyrdom like Bhagat Singh and others. I have read about Baikunthnath Shukal and I have a copy of The Trial of Baikunthnath Shukal in Hindi translation in my possession since many years and I admire Baikunthnath Shukal’s martyrdom. If any wrong impression has been created by the incomplete printed sentence, I own the responsibility and sincerely apologise for that and shall get it corrected at the earliest.
The exact words in my copy were:
There were seven approvers in the case, out of whom Phaninder Ghosh was murdered in Bihar and Baikunth Shukal was executed for that.
The last two words (‘for that’) were omitted by the copy editor of the manuscript, and that changed the meaning of the whole sentence.
About Mahatma Gandhi’s efforts to save the life of Bhagat Singh, I have discussed those mostly in the debate in Mainstream articles and I found D.P. Das’ interpretation more close to the reality as was also thought by A.G. Noorani. But opinions can differ on the issue and I don’t assert that ‘only my opinion is correct’! Mahatma Gandhi and Bhagat Singh had two different perceptions about India’s freedom and Bhagat Singh, despite showing full respect to Mahatma Gandhi, never accepted his perception of India’s freedom and future development. He found Jawaharlal Nehru and Subhas Bose’s views more close to his heart and out of the two, he appreciated Nehru more for his rational approach and thought that Subhas Bose was more emotional. Perhaps on all these issues different opinions exist and one should agree to disagree.
Although the manuscript of the book was edited by an eminent English scholar and Professor and by the publisher’s professional copy editor, I still appreciate the eminent senior journalist and reviewer’s (Barun Das Gupta’s) concluding advice: “The book, however, needed careful editing to improve the language.”
I hope my response can be carried in the ‘Communication’ column in this form.
Chaman Lal
Chandigarh (Retired Professor, JNU, New Delhi)
Posted by Chaman Lal at 16:06