Posted by Chaman Lal at 00:04 No comments: Links to this post

Comrades!
It is natural that the desire to live should be in me as well, I don’t want to hide it. But I can stay alive on one condition that I don’t wish to live in imprisonment or with any binding.
My name has become a symbol of Hindustani revolution, and the ideals and sacrifices of the revolutionary party have lifted me very high – so high that I can certainly not be higher in the condition of being alive.
Today my weaknesses are not visible to the people. If I escape the noose, they will become evident and the symbol of revolution will be tarnished, or possibly be obliterated. But to go to the gallows with courage will make Hindustani mothers aspire to have children who are like Bhagat Singh and the number of those who will sacrifice their lives for the country will go up so much that it will not be possible for imperialistic powers or all the demoniac powers to contain the revolution.
And yes, one thought occurs to me even today – that I have not been able to fulfill even one-thousandth parts of the aspirations that were in my heart to do something for my country and humanity. If I could have stayed alive and free, then I may have got the opportunity to accomplish those and I would have fulfilled my desires. Apart from this, no temptation to escape the noose has ever come to me. Who can be more fortunate than me? These days, I feel very proud of myself. Now I await the final test with great eagerness. I pray that it should draw closer.
Your comrade
Bhagat Singh 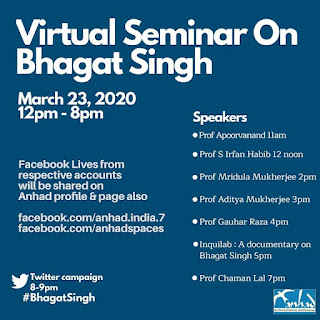 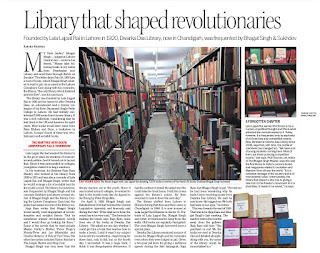 Posted by Chaman Lal at 21:02 No comments: Links to this post

Bhagat Singh letter on 20th March 1931-three days before his execution along with Sukhdev and Rajguru.
(The last letter to British Government in India was addressed by Bhagat Singh, Rajguru and Sukhdev to Punjab Governor on 20th March 1931, three days prior to their hanging, demanding that ‘being war prisoners’, they should be shot and not ‘executed’.)

To
The Punjab Governor
Sir,
With due respect we beg to bring to your kind notice the following:
That we were sentenced to death on 7th October 1930 by a British Court, L.C.C Tribunal, constituted under the Sp. Lahore Conspiracy Case Ordinance, promulgated by the H.E. The Viceroy, the Head of the British Government of India, and that the main charge against us was that of having waged war against H.M. King George, the King of England.
The above-mentioned finding of the Court pre-supposed two things:
Firstly, that there exists a state of war between the British Nation and the Indian Nation and, secondly, that we had actually participated in that war and were therefore war prisoners.
The second pre-supposition seems to be a little bit flattering, but nevertheless it is too tempting to resist the desire of acquiescing in it.
As regards the first, we are constrained to go into some detail. Apparently there seems to be no such war as the phrase indicates. Nevertheless, please allow us to accept the validity of the pre-supposition taking it at its face value. But in order to be correctly understood, we must explain it further. Let us declare that the state of war does exist and shall exist so long as the Indian toiling masses and the natural resources are being exploited by a handful of parasites. They may be purely British Capitalist or mixed British and Indian or even purely Indian. They may be carrying on their insidious exploitation through mixed or even on purely Indian bureaucratic apparatus. All these things make no difference. No matter, if your Government tries and succeeds in winning over the leaders of the upper strata of the Indian Society through petty concessions and compromises and thereby cause a temporary demoralization in the main body of the forces. No matter, if once again the vanguard of the Indian movement, the Revolutionary Party, finds itself deserted in the thick of the war. No matter if the leaders to whom personally we are much indebted for the sympathy and feelings they expressed for us, but nevertheless we cannot overlook the fact that they did become so callous as to ignore and not to make a mention in the peace negotiation of even the homeless, friendless and penniless of female workers who are alleged to be belonging to the vanguard and whom the leaders consider to be enemies of their utopian non-violent cult which has already become a thing of the past; the heroines who had ungrudgingly sacrificed or offered for sacrifice their husbands, brothers, and all that were nearest and dearest to them, including themselves, whom your government has declared to be outlaws. No matter, it your agents stoop so low as to fabricate baseless calumnies against their spotless characters to damage their and their party's reputation. The war shall continue.
It may assume different shapes at different times. It may become now open, now hidden, now purely agitational, now fierce life and death struggle. The choice of the course, whether bloody or comparatively peaceful, which it should adopt rests with you. Choose whichever you like. But that war shall be incessantly waged without taking into consideration the petty (illegible) and the meaningless ethical ideologies. It shall be waged ever with new vigour, greater audacity and unflinching determination till the Socialist Republic is established and the present social order is completely replaced by a new social order, based on social prosperity and thus every sort of exploitation is put an end to and the humanity is ushered into the era of genuine and permanent peace. In the very near future the final battle shall be fought and final settlement arrived at.
The days of capitalist and imperialist exploitation are numbered. The war neither began with us nor is it going to end with our lives. It is the inevitable consequence of the historic events and the existing environments. Our humble sacrifices shall be only a link in the chain that has very accurately been beautified by the unparalleled sacrifice of Mr. Das and most tragic but noblest sacrifice of Comrade Bhagawati Charan and the glorious death of our dear warrior Azad.
As to the question of our fates, please allow us to say that when you have decided to put us to death, you will certainly do it. You have got the power in your hands and the power is the greatest justification in this world. We know that the maxim "Might is right" serves as your guiding motto. The whole of our trial was just a proof of that. We wanted to point out that according to the verdict of your court we had waged war and were, therefore, war prisoners. And we claim to be treated as such, i.e., we claim to be shot dead instead of to be hanged. It rests with you to prove that you really meant what your court has said.
We request and hope that you will very kindly order the military department to send its detachment to perform our execution.
Yours,
Bhagat Singh         Rajguru       Sukhdev
( Excerpted from The Bhagat Singh Reader-pages-63-65)

This is a copy of a letter written by Viceroy secretary Emerson to Mahatma Gandhi on 20th March-about Subhash Chander Bose holding a protest rally in Delhi to protest against the execution of Bhagat Singh.

Posted by Chaman Lal at 21:18 No comments: Links to this post