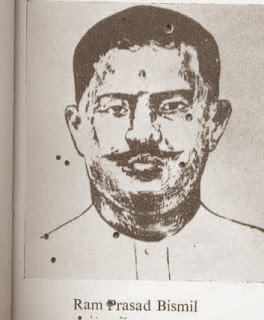 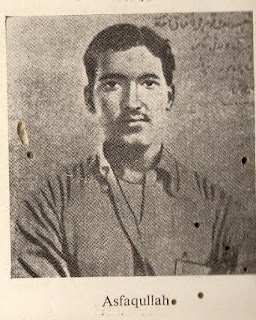 Politics of Religion/Communalism and ‘The Last Message of Martyr of the Nation Sh. Ram Prasad Bismil’
Chaman Lal
Bhagat Singh was not only an atheist and socialist revolutionary, he was dead against communalism and wrote essays like-‘Religion wise riots and their Solution’, ‘Religion and our freedom Struggle’. He was votary of equal rights of Dalits and exhorted them ‘to rise like lions and snatch their rights!! What were Bhagat Singh and other revolutionaries views about religion based communal politics is clear from the fact that even a religious revolutionary Ram Prasad Bismil’s last message to the nation, which was translated in Punjabi by Bhagat Singh with his own note to it in ‘Kirti’-Punjabi journal, is  reproduced below!

In January 1928 issue of ‘Kirti’, a Punjabi/Urdu journal established by Ghadarite revolutionaries in Amritsar in 1926, Bhagat Singh wrote a piece-‘The Last Message of Martyr of the Nation Sh. Ram Prasad Bismil’. Ram Prasad Bismil, Ashfaq Ulla Khan, Roshan Singh and Rajinder Nath Lahiri were hanged in Gorakhpur, Fyzabad, Allahabad and Gonda jails on 19th and 17thDecember 1927 as Kakori case convicts. Lahiri was executed two days earlier on 17thDecember itself in Gonda, other three were executed on 19th. Memorial to Bismil was built in premises of Gorakhpur jail, Ashafq was buried in his home town Shahajahanpur and his memorial is there, though he was hanged in Fyzabad jail. Faizabad was earlier spelled as Fyzabad. Roshan Singh’s memorial stands now in Allahabad, where he was executed, though that jail no more exists. Lahiri monument is in Gonda, all in U.P. Kakori is a small railway station near Lucknow where on 9th August 1925, a dacoity was conducted by revolutionaries of Hindustan Republican Army (HRA) to loot government treasury, in which eight thousand rupees were looted from Government treasury money. Chandershekhar Azad, leader of this group, as well as of HSRA later, could never be arrested, but many others were arrested. The four martyrs of Kakori case became most popular among Indian people, which were surpassed only by Bhagat Singh and his two other comrades-Rajguru and Sukhdev’s martyrdom later in 1931.Memorial to Kakori case martyrs and other convicts has been erected at that very point, where dacoity took place about two kilometre away from Kakori Railway station, where also a descriptive plaque has been put up. The whole area even today looks to be deep thick forest area. Other convicts with long sentences were Jogesh Chander Chatterjee, who rose to become Member of Parliament later, from 1956 till death in 1969,  Sachindernath Sanyal, his brother Bhupendernath Sanyal, Sachindernath Baxi, Rajkumar Sinha, Vishnu Sharan Dublish, Ramkrishan Khatri, Mukundi Lal, Ramnath Pandey, Manmathnath Gupt, Ramdulare Trivedi, Suresh Chander Bhattacharya, Premkrishan Khanna, Govindcharan Kar etc. Kakori case prisoners observed hunger strikes in jails for long periods and on one occasion in 1930, Bhagat Singh sent a telegram from Lahore jail appealing to call of their hunger strike.
After the executions of Kakori case convicts in December 1927, Bhagat Singh wrote few pieces in next issue of ‘Kirti’ in January 1928 as a tribute to them-‘Tears of love for Kakori Martyrs’, which was an editorial of the journal; Bhagat Singh was part of editorial team and he wrote ‘The condition of Hangings of Kakori Martyrs.’ Earlier he had written ‘Introduction to Kakori Prisoners’ in May 1927 issue of ‘Kirti’. Later Bhagat Singh also a sent a telegram to imprisoned Kakori convicts other than four martyrs, when they were on hunger strike in 1930, through trial court. He translated this very significant message of Ram Prasad Bismil in Punjabi from Hindi with his approval and comment. Bismil’s message holds much significance today in context of Muzaffarnagar riots and increasing communalization of Indian polity, it is apt tribute to Bhagat Singh also. Later Bhagat Singh himself wrote on the menace of Communalism affecting Indian freedom movement many times in ‘Kirti’.

He has written an autobiographical sketch, which was published in ‘Swadesh’, paper of Gorakhpur. We are presenting the abridged form of that for readers, so that they should know the last thoughts of the revolutionary.
He writes on 16th (December, 1927-three days before execution)-(Bhagat Singh)