Chandershekhar Azad was born on 23rd July 1906 in Bhavra village of Jhabua district in present day Madhya Pradesh. He was born to mother Jagrani Devi and father Sita Ram Tiwari in a hut. His father Sita Ram Tiwari had migrated from Badraka village in Unnao district near Kanpur. His elder son Shukdev was born in Badraka. Parents had five children but only Chandershekhar Azad survived.

Azad had some elementary education in village,before going to Bombay at the age of 12-13 years, where he did some menial jobs. He went to Benaras and got enrolled in Sanskrit school. Here under the influence of non cooperation movement launched by Mahatma Gandhi in 1921, he took part in the movement and got 15 lashes on his back,shouting every time 'Mahatma Gandhi ki Jai'. He was badly bleeding after the punishment,but did not accept medication in jail and prefered being taken care of by some freedom fighter. After Gandhi withdrew the non cooperation movement as a fall out of Chauri Chaura incident on 4th February 1922,Azad got disillusioned by Gandhi and Congress movement. As Shachindernath Sanyal was trying to regroup revolutionary movement,Azad joined Hindustan Republican Army(HRA) along with many other young men like Ram Prasad Bismil,Ashfaquallah,Roshan Singh,Rajender Lahiri,Bhagat Singh etc. In Kakori rail dacoity on 9th August 1925, Azad and Kundan lal could not be arrested,whereas Bismil-Ashfaq-Roshan-Rajinder were hanged on 17th and 19th December in different jails of U.P.

In 1928,Bhagat Singh,Azad and many others regrouped in Ferozeshah Kotla grounds of Delhi on 8&9th September and rechristened their organisation as Hindustan Socialist Republican Army(HSRA) and it political wing as HRS Association.Chandershekhar Azad with the name of Balraj was appointed commander-in-chief of the armed wing and Bhagat Singh became the ideologue of political wing. They wanted to make mass organisations of students,youth and workers,but Lala Lajpat Rai's death at the hands of cruel British police lathi charge, made HSRA pledge to take revenge for this 'national insult'. Accordingly Bhagat Singh and Sukhdev killed police officer Saundres on 17th december 1928 at Lahore in front of SSP office. Azad supervised the whole operation and killed sub inspector Chanan Singh after repeated warnings, as he tried to follow and catch Bhagat Singh and Rajguru.

Later when organisation decided to send Bhagat Singh to throw bomb in Central Assembly Delhi on 8th April 1929, against the wishes of Azad, he saw to take care of all aspects of this act as well. Later HSRA planned to rescue Bhagat Singh from jail,but the plan was abandoned due to death of Bhagwati Charn Vohra on 28th May 1930 at Ravi Banks Lahore during bomb experiment.

Chandershekhar Azad remained active in the organisation,but on 27th February 1931 at Alfred Park Allahabad ,he was encircled by British police allegedly at the deception of someone in the group, named later as Vir Bhadar Tiwari. Sukhdev Raj with him at that time.Encounter took place around 9.a.m.Azad made Sukhdev Raj flee and faced the police with his mouser till the end,wounding many British officers. Even after firing stopped,British police was scared to go near his body. News spread in Allahabad and people gathered in large numbers. Police tried to cremate the body in hurry,but people foiled their attempt. Senior leaders like Kamla Nehru, wife of Pandit Jawaharlal Nehru, Padamkant Malviya, nephew of Madan Mohan Malviya and editor of 'Abhyudue', joined the funeral procession. Shachindernath Sanyal's wife made a passionate speech exhortin people to take with them the ashes of Azad's cremated body as people in Calcutta did at Khudi Ram Bose's cremation in 1908. People followed her advice and nothing survived of the ashes.

Azad used to go to Pt. Nehru's house in Allahabad and Pt. Moti Lal Nehru, father of Jawaharlal was more sympathetic to them.Moti lal nehru died on 6th February 1931. Jawaharlal nehru had given money to Azad for sending Yashpal and Surender Pandey to Moscow for the study of Socialist thought,which did not materialise after his martyrdom.Though Azad was not intellectual like Bhagat Singh,but he was convinced wit the ideas of Socialis. He has listened 'Communist Manifesto' from Shiv Verma in its Hindi rendering and was impressed with it.

Azad was very close to Bhagat Singh and both were like Ho Chi Minh and Gen. Giap combination of Vietnam or Castro-Che Guvera combination of Cuba or even Mao-Chu Teh combination in China. Had their revolutionary movement grown and succeeded in India, another combinatio would have been created. My salute to the memory of one of the finest, most honest,brave and sincere revolutionaries of India!

Azad's widowed mother lived in her village,without believing that Azad has been martyred. Jagrani Devi was brought to Jhansi by two of Azad's best disciples-Bhagwan Das Mahour and Sadashiv Malapurkar in 1948, only then she came to terms with Azad's martyrdom. She died in March 1951 and was shown fire by Sadashiv Malapurkar, revolutionary comrade of Azad. Bhagwan Das Mahour was married to Master Rudra Narayan's daughter, at whose house Azad used to spend long time in Jhansi.
Location: wall-Admirers of Bhagat singh
Posted by Chaman Lal at 22:03 1 comment: Links to this post

Email ThisBlogThis!Share to TwitterShare to FacebookShare to Pinterest
Labels: Azad 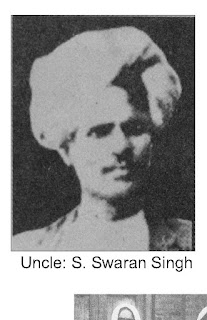 Swarn Singh, who died on 20th July, 1910, according to Malwinderjit Singh Waraich, author of many books on revolutionaries and revolutionary freedom movement of India, was the younger uncle of Bhagat Singh. Incidentally Swarn Singh died at almost same age-23 years, as Bhagat Singh kissed the gallows around same age.
Swarn Singh, the youngest son of S. Arjan Singh was born in 1887 at Khatkar Kalan , exact date of birth is not yet known. Along with his elder brothers-Kishan Singh,father of Bhagat Singh and Ajit Singh, close associate of Lala Lajpat Rai and Sufi Amba Prasad, he also got his education from Saidas Anglo Vedic school Jalandhar. As Kishan Singh and Ajit Singh were both active in freedom struggle, so Swarn Singh also followed their path. He was particularly associated with Ajit Singh’s activities in Lahore, like organizing Bharat Mata society and ‘Mohabbatan-e-Watan’ and focusing on peasant problems of those days. Ajit Singh used to bring out lot of literature in Urdu and English those days and Swarn Singh played major role in publishing activities.He was accused for publishing and selling books and pamphlets like—‘Bandar Bant’,’Divide and Conquor’, “Peshwa’,Hindustan Mein Angrezi hakumat’,’Ghadar’, ‘Baghi Masih’, ‘Amanat mein Khayanat’ and many others Because of his activities, he was also jailed many times and caught tuberculosis in jail. In a book edited by well known historian Dr. Ganda Singh for Punjabi University Patiala-‘Seditious Literature in The Panjab’, all the intelligence reports of those days, collected in the book, give vivid description of Swarn Singh’s activities and also refer to his being at the advanced stage of consumption, because of which he could not be tried for certain cases against him. So it is clear that Swarn Singh dedicated his life to nation, though he came from a well to do family and because of jail sufferings, he became consumptive, he did not receive any proper treatment for that and passed away on 20th July 1910, at the age of just 23 years.
Veerender Sandhu, author of family history of Bhagat Singh in Hindi has referred to Swarn Singh as being appointed Superintendent of an orphanage in Lahore in 1905, where lot many orphan children were brought by his elder brother Kishan Singh from Rajputana, because of severe drought there. Swarn Singh turned out this orphanage into a revolutionary training centre for children. He became a propaganda secretary of ‘Bharat Mata Society’ established by his elder brother Ajit Singh. After Ajit Singh’s deportation to Mandalay jail in Burma in 1907, Swarn Singh published his anti British articles from Lahore and he was convicted on 20th July 1907 and sentenced to one and half year imprisonment, where he caught consumption. He was tortured in jail by putting him with Mahasha Ghasita Ram for drawing water from well like oxen are put up. He refused to obey the illegal orders and he was confined to isolated cell for long time.
Swarn Singh was married to Bibi Hukam Kaur, who suffered silently, while he was in jail, rather than celebrating his married life with her and later she lived a widowed life for 56 years, dyeing without an issue in 1966.All her affections she gave to Bhagat singh, who was also very caring of both of his aunts. Harnam Kaur, also without an issue, waited for 38 years for the return of her husband Ajit Singh from exile, who returned to India in March 1947, only to be with her for last six months of his life, passing away in Dalhousie on 15th August 1947, at the dawn of independence.
The whole family fo Bhagat singh served the nation. His grandfather Arjan Singh trained his three sons and grandson Bhagat Singh for serving the nation.In fact Bhagat Singh was pledged to nation by his grandfather on his thread ceremony in early childhood. Bhagat Singh’s father suffered jail terms many times as Congress party activist and remained member of Punjab Assembly during 1937 elections. Kishan Singh’s younger brother Ajit Singh remained deported and exiled for nearly four decades. Ajit Singh’s younger brother Swarn Singh was no less active than other members of his family in patriotism and suffering for nation, however he remained most unknown and least talked about. It is time for the nation to acknowledge and recognize Swarn Singh’s selfless service to the nation and his contribution to freedom struggle by celebrating his death centenary in a befitting manner. Would the people’s organizations and Govt. of India and Punjab pay attention towards their long delayed duty in this regard?
Chaman Lal
Posted by Chaman Lal at 21:06 1 comment: Links to this post

‘Gandhi and Bhagat Singh’: Historian’s perplexity, thorn in the neck of national movement*

Posted by Chaman Lal at 13:20 7 comments: Links to this post

Some English books on Kartar Singh Sarabha and Ghadar party


This is part of bibliography of my monograph on Kartar Singh Sarabha, published by National Book Trust of India, New Delhi in Hindi and Punjabi and likely to come soon in English.List of Hindi and Punjabi books could not be visible,so I had to remove the list