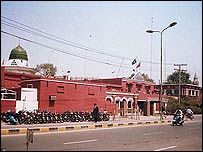 Posted by Chaman Lal at 18:51 5 comments: Links to this post 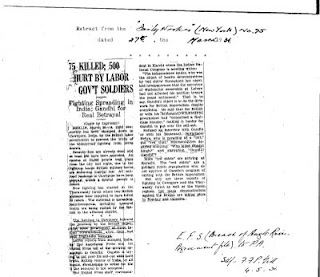 Posted by Chaman Lal at 18:45 No comments: Links to this post 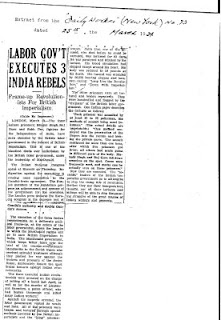 Posted by Chaman Lal at 18:38 No comments: Links to this post

Rare Documents of and about Bhagat Singh


It would be 76 years of martyrdom of Bhagat Singh, Rajguru and Sukhdev on 23rd March, 2007. Last year at the completion of 75 years of their martyrdom and in same year from 28th September 2006, birth centenary programmes of Bhagat Singh started nationally, somewhat at governmental level but more at non-governmental level. Memorial programmes on Bhagat Singh have gained momentum since, there have been lot of publications brought out in this period in Hindi, Punjabi, English and many other Indian languages, which continues uninterrupted till day. A proposal to set up Bhagat Singh Chair at J.N.U., New Delhi has been accepted by national programme implementation committee recently. Mooted by this author this proposal was endorsed by Prof. Bipan Chandra, Prof. Prabhat Patnaik and Prof. G.S.Bhalla. It was supported by many eminent scholars and political leaders like Prakash Karat, A.B.Bardhan and Shashi Bhushan.
In these ongoing programmes on Bhagat Singh all over the country, I was invited to deliver lectures on his thought and role in freedom movement. I delivered these lectures at far of places like Arrah (Bihar), Patna, Indore(MP), Rohtak(Haryana), Ranchi(Jharkhand), Mumbai, Benaras and Thanjavur(Tamilnadu) during September ’06 to February ’07. Political Science deptt. of Mumbai University is perhaps the first deptt. in all over the country, which is holding two days national seminar on Bhagat Singh on 28th and 29th March ’07.On 23rd March this year, there are going to be hundreds of programmes all over the country, including some official ones. Many leftist organizations are planning to take out huge demonstrations and rallies to oppose the neo liberal anti people policies of the government, to mark this day. Leftist organizations of all hues are trying to resurrect Bhagat Singh as the most strong anti-imperialist resistance symbol in the
present context. National Book Trust is also coming out with some publications on this day.
It is clear that in the 150th year anniversary of first war of freedom struggle of 1857 and in the birth centenary year of Bhagat singh, an emotion of patriotism is emerging afresh ,in the wake of U S neo imperialism becoming more aggressive and dangerous than old British imperialism. Reliving the nationalistic tradition in the whole country, a renaissance is taking place in the country, in which the image of Bhagat Singh is emerging as supreme ideological symbol of resistance. At international level too, struggling people of the world against neo imperialism are looking to Bhagat Singh as symbol of resistance alongwith Che Guvera. This very year , a publisher from U K is bringing out collection of Bhagat Singh’s writings in English.
Bhagat Singh was always considered significant at national and international level, but this did not come into focus. The rare documents acquired by this author in this period, throw light on his significance. One of these document is Periyar’s editorial in his Tamil weekly ‘Kudai Aarsu’ in 22-29th March 1931 issue, immediately after Bhagat Singh and others execution. This was translated in English and published in ‘Modern Rationalist’ in November ‘o6 by followers of Periyar at my request, after more than 75 years of its first publication. It was E V Ramaswamy Naikar Periyar, who got ‘Why I am an Atheist’ of Bhagat Singh, translated in Tamil, as early as in 1934 by Comrade P Jeevanandan and published in booklet form. This booklet continues to be popular in Tamilnadu, even today, after so many editions have come out. This was perhaps first ever translation of this historic document in any Indian or other language, much earlier than even Punjabi translation. There were many creative writings in Tamil, after the execution of Bhagat Singh, which were proscribed by British authorities in those days.
Internationally also, the reports of execution of Bhagat Singh and disturbances in the country after that, were published in pro communist ‘Daily Worker’ from Newyork in USA. It is almost strange to know that the news of Bhagat Singh execution was published in ‘The Tribune ‘ of Lahore and ‘ Daily Worker’ of Newyork on the same day- 25th March 1931, in the age of slow communication channels as compared to today. Even Tribune from Lahore could not publish this report on 24th March, as the news of execution on 23rd March at 7 p.m. remained suppressed in media in Lahore itself, where the executions took place. ‘Daily Worker’ again carried report on Kanpur riots on 27th March 1931, which spread after these executions.
Five unpublished letters of Bhagat Singh have been found out in this period. Copies of four letters have been acquired from Nehru Memorial Museum and Library(Teenmurti), New Delhi. Fifth letter has been recovered from the exhibits of Lahore Conspiracy case. The copies of all these letters were gifted to this author by Malwinderjit Singh Waraich, a dedicated writer and activist about revolutionary movements in India for national freedom. Three of these letters are in English, one in Punjabi and another in Urdu.
From these documents, one can better understand ideological perspective of Bhagat Singh and the significance of his contribution to India’s freedom struggle.
• Published in ‘Mainstream’ and ‘The Tribune’

Posted by Chaman Lal at 18:35 No comments: Links to this post


An Emotional Journey through Lahore and surroundings

Posted by Chaman Lal at 18:23 2 comments: Links to this post 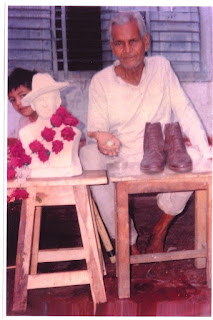 Posted by Chaman Lal at 18:20 3 comments: Links to this post 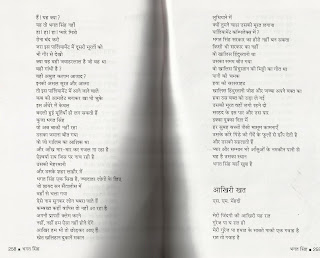 There is news from Delhi
alas! Alas!!
What a mess they have made
Of Bhagat Singh
In the Parliament Complex!

For sixty years they petitioned
The British rejected him
But YOU! Our own government.
Erect his statue
in the Parliament Complex
At last the government thumped its chest
and said why not!
and erected the statue in the Parliament Complex.
But when the veil was lifted
You discover it is not Bhagat Singh
That 24 year old beautiful lad
Nor his young limbs that they could not properly burn
On the fateful night when they hanged him.

It is some 60 years old guy
Flabby and tired looking
With upturned mustaches
Oh what the hell is this.
This is not our Bhagat Singh
In the Parliament Square
Who the hell is he ?

Ha ha ha ! Dear friends
Wipe your tears look closely
At all the other statues in the Parliament
Is it the same Jawahar Lal as he was ? Is it the same Gandhi?
The same Abulkalam azad?

The in-coming and out-going respected parliamentarians
Have made an omelet of their reality
And gobbled them up long long ago.
In this grand square
Only cissored and edited versions
Can find a lasting place.

Bhagat Singh was the child of his time
And times have changed. He loved Urdu poetry and Ghalib
And Ghalib , getting rid of his robe
Is Galib now, winking and singing some trashy "gajal"
Ishwarya Rai is dancing on it
So kind of her.

And in his city Lahore
Bhagat Singh is a Sikh
Who perhaps migrated to India in '47
Such names make people nervous
Is the god-damn man coming back?
to claim his property??
We shall never let that happen
After all we left fields and barns
shops and houses
in Ludhyana.

Let his statue remain where it has remained for 60 years
Across both sides of the border
In a heart or two.
There every morning
Longings as innocent and ignorant as little children
Cover his young body with fresh garlands of marigold
Bathe his limbs with tears of love and adoration
He belongs there
He is happy there.

Background letter of the poem given below: