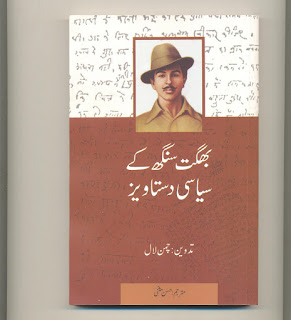 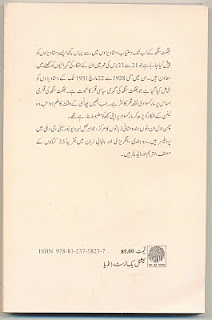 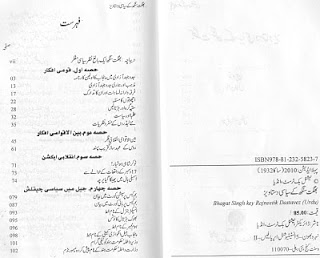 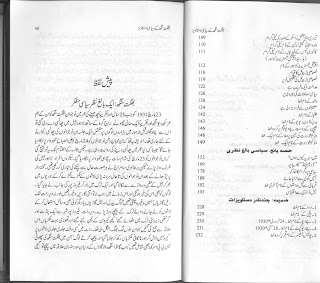 It is one of the happiest days of life.My long awaited book from National Book Trust of India,New Delhi-'Bhagat Singh ke Syasi Dastavez' in Urdu translation has come out.I was most keen to get this book in Urdu,translated from my original Hindi book to publish soon.It came after three year of its Hindi publication.One of my friends in Kolkata was so much annoyed with NBT that why they are not publishing Bhagat Singh's 'Why I am an Atheist,with introduction by Prof. Bipan Chandra,eminent historian of modern India and current Chairman of National Book Trust of India.He was thinking that its Urdu publication was being avoided to appease minority religious fundamentalists, who would be potential readers of the book.I used to assure him that it was not deliberate delay,it was just procedural and nothing more should be seen in it.Now this book with my editing and introduction contains not only 'Why I am an Atheis',but most of Bhagat Singh's other major writings,around fifty, along with about thirty pages from his 'Jail Notebook' in English,which contains a plan for his new book,are reproduced in this book.I wanted this book to reach my Pakistan friends,many of whom are great admirers of Bhagat Singh.In fact the younger generation in Pakistan is curious to know about Bhagat Singh and Che Guvera and they are fascinated by their images.Hope this book shall be able to satisfy their curiosity and help them to understand Bhagat Singh better as a mature political thinker of South Asia.
Posted by Chaman Lal at 19:04 3 comments: Links to this post

It was on 23rd December 1912,when capital of India,which was shifted from Calcutta to Delhi in 1911,by British colonial rulers,Governor General of India Lord Harding went on elephant through Delhi bazars to exhibit British power in newly established capital.Under the guidance of Ras Behari Bose,the great revolutionary nationalist, young revolutionaries threw bomb on Lord Harding near Chandni chowk.Though Harding escaped with injuries,four brave young men of India-Master Amir Chand, Awadh Behari,Bhai Balmukund and Basant Kumar Biswal were arrested and sentenced to death.Ras Behari Bose escaped police net.Master Amir Chand,Avadh Behari and Bhai Balmukund were executed on 8th May 1915 in Delhi jail,which has now become Maulana Azad medical College on Bahadursha Zafar road in Delhi.Its front gate faces Khooni Darwaza and Ferozeshah Kotla grounds.In Khooni Darwaza two sons of Bahadur Shah Zafar in 1857 war of independence were massacred and their heads were sent to Emperor Zafar in Lal Qila on a plate.Ferozeshah Kotla ground was the location of historic meeting organized by Bhagat Singh and Comrades on 8&9th September 1928, where socialist programme for revolution was first evolved at the initiative of Bhagat Singh.
A small memorial,with bad accessibility is built inside medical college now,few people reach there to pay tributes.Incidentally Bhagat Singh and B K Dutt were kept here in Delhi jail cell, after they threw bombs in Central Assembly(Parliament) on 8th April,1929.Basant Kumar Biswal was executed in Ambala central jail on 9th May 1915.Biswal was 23 year old young from Benagal.The day Bhai Balmukund was executed,same day his wife Ram Ratti expired,who was almost fastin with his husband.Bhai Balmukuund was from the family tree of Bhai Matidas,who was martyred along with ninth Sikh Guru Teg Bahadur in Delhi by Aurangzeb.
Ras Behari Bose again guided Ghadar party movement from Lahore in 1914-15,again escaped in nick of time,reaching Japan,where he finally joined Netaji Subhash Bose's Azad Hind Fauj.
Bhagat Singh wrote sketches of these four brave martyrs in Punjabi journal 'Kirti' in September 1928 and paid rich tributes to them.I remember them with great respect.Photos of four revolutionaries are available on my facebookwall in album on Indian revolutionaries.Jail memorial and Khooni Darwaza photos also might be on my wall.
Updated 14 minutes ago · Comment · Like
Posted by Chaman Lal at 13:46 1 comment: Links to this post