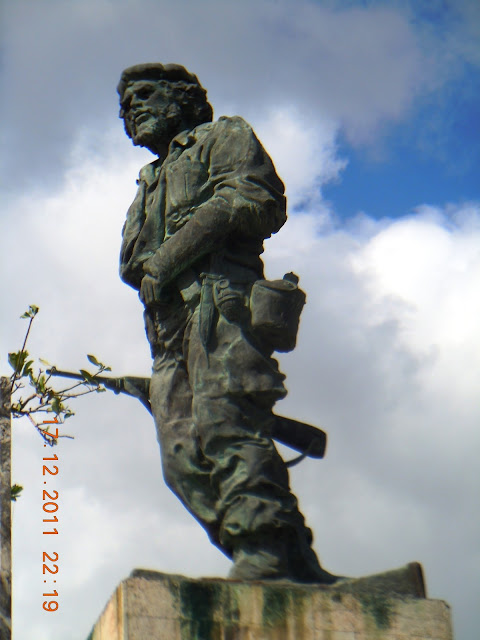 Che Guevara born on 14th June 1928 was martyred by US imperialists on 9th October 1967 in Bolivia, where he had gone to organize revolution. Che was finance minister in Cuban Government, yet his restless soul did not allow him to continue in Government. First he went to Africa to make revolution, where he was not successful, later he decided to work for revolution in Latin America. Che wished most intensely to make revolution in his birthplace Argentine, but he landed in Bolivia, where Communist movement had some base. It was here, he was assassinated. His assassin, a known criminal was shivering even after consuming full bottle of hard liquor, when Che challenged the coward to shoot him. The same assassin was treated for his eyes decades later by Cuban Government.
Che Guevara had liberated Santa Clara city in Cuban during revolution. With just 300 hundred guerrillas, he had disarmed more than 3000 Batista army and looted train full of arms.I was fortunate to visit Santa Clara, Santiago de Cuba and Havana in December 2011. One of the grandest monument to any revolutionary is built in Santa Clara in memory of Che Guevara, here are photographs of Che and his monuments in Cuba!
http://en.wikipedia.org/wiki/Che_Guevara 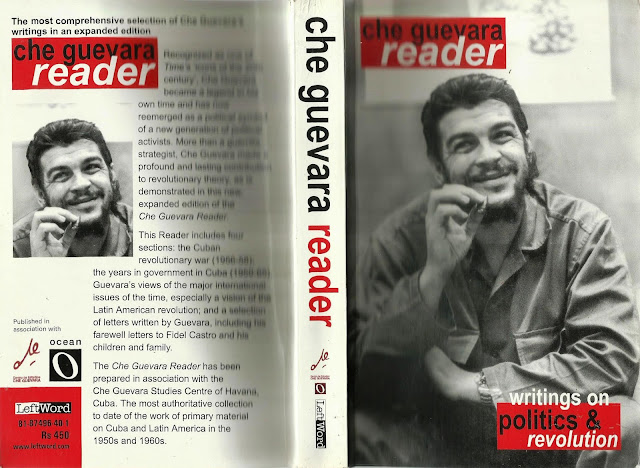 Che Guevara Reader: Writings on politics and revolution, Edited by David Deutschmann, LeftWord with Ocean, New Delhi, Ist Indian ed. 2004, reprint 2004, pages 437,, Price Rs. 450/
In this selection, some major writings of Che Guevara from different books or articles have been put together. Book includes, apart from Introduction by the editor, sketch of Che, Choronolgy of his life, Glossary of events and persons, Index and a listing of Che Guevara’s all writings and speeches as Bibliography and notes as well. It is very well annotated edition of Che’s major writings, which shows him to be a very mature thinker, even on economic matters. Che Guevara’s theoretical writings have been so important that Fidel Castro realised after the fall of Soviet Union in 1989, that to save Cuban society from falling into the trap of western consumer culture, the revival of Che Guevara’s purity of revolutionary thought and practice is essential, that is how Che Guevara’s major writings, apart from His Bolivian Diary published earlier were published in Cuba and abroad in other languages. In this book, Che’s writings have been included in four parts. Part ! are selections from Reminiscences of Cuban Revolutionary War as The Cuban revolutionary war. Part 2 titled as ‘The Cuba Years-1959-65 includes 12 of Che’s speeches and writings. Part 3 as ‘International Solidarity’ includes 8 of his speeches and writings and part 4 includes 21 of his most touching letters with personal touch. In a way this one volume offers glimpse of Che Guevara’s personality in almost totality, as person and thinker.
Editor David in his introduction has mentioned that the book was published for first time in 1997 to mark the 30th anniversary of Che’s martyrdom. Editor also wishes to dispel the somewhat narrow image of Che as ‘heroic’ or ‘adventurer’, which has been promoted by media more, his contribution to Marxist theory remained unknown partly as English editions were not available of Che’s writings.
Part I of the book is covered under Reminiscences, Part Ii The Cuban years include the following essays:
1.   Social ideals of the Rebel Army-29th January 1959-dream of Jose MartiAll the Cuban people must become guerrilla army
2.   Political Sovereignty and Economic Independenc-30th March 1960
First in television series-‘people’s University’-2nd world war took 40 million lives, perhaps more. Tradition of Cuban struggles before January 1959 victory—July 26th 1953, 12th August 1933, 24th February 1895 or 10th October 1868. Latin American struggles further-Upper Peru-25th May 189,, Buenos Aires 25th May 1810. 10th March 1952-Batista seizing power.. Marti saying-‘A radical is nothing less than that-one who goes to the roots’..This revolution is determined to eliminate injustice at the roots, as Fidel has said paraphrasing Jose Marti’ (Page 103).
‘Revolutions can’t be exported, Cuba does not export revolutions. Revolutions take place when there are a series of insurmountable contradictions within a country.’(109)
3.   Speech to medical students and health workers-20th August 1960) covered in another book
4.   Notes for the study of the ideology of the Cuban Revolution-October 1960)
One can point to certain mistakes of marx as thinker and an investigator of the social doctrines and of the capitalist system in which he lived. We Latin Americans, for example. Cannot agree with his interpretation of Bolivar, or with his and Engels’s analysis of the Mexicans, which accepted certain theories of race or  nationality that are unacceptable today.......We recognize the essential truths of Marxism as part of humanity’s body of cultural and scientific knowledge. We accept it with the naturalness of something that requires no further arguments.’ (Page 122)
‘The laws of Marxism are present in the events of the Cuban revolution, independently of whether its leaders profess or fully know these laws from a theoretical point of view.’ (Page 123)
28th May 1957, milestone for victory in El Uvero.-a territory gained now.
5.   Cuba: Historical exception or vanguard in the ant colonial struggle?-April 1961
‘What is exceptional about Fidel Castro’s personality...Fidel is person of such tremendous personality that he would gain leadership in whatever movement he participated....his personal gifts of audacity,, strength, courage, extraordinary determination always to discern the will of the people-... his ability to assimilate knowledge and experience in order to understand a situation in its entirety without losing sight of the details, his unbounded faith in the future and breadth of vision...’(page 131)
January 1959, first social revolution in the Caribbean and the most profound of the Latin American revolutions dawned-132 page
Lumumba savagely assassinated, in the greatness of his martyrdom showed the mistakes that cannot be committed. Once the anti imperialist struggle begins, we must constantly strike hard, where it hurts the most, never retreating....stronger action of the masses.-Page 142
6.   A new culture of Work-21st August 1962-Speech to Trade unions
New factories to be built, national trade unions-the revolutionary nuclei (of the party), the entire government and the workers.-Page 148
Sacrifice is part of building a new society.  -Same-
Enthusiasm, discipline, self sacrifice and necessary technical knowledge...P.150
We have reached socialism and we continue forward! Venceremos-We will win-P.152
7.   The cadre: Backbone of the Revolution-September 1962
8.   To be a young Communist-20th October 1962
The Union of Young Communists(UJC) evolved from Association of Young Rebels
Must be the vanguard of all movements
‘we are a flaming torch, that just as we are all individually a model for the people for Cuba, we are also model for the peoples of Latin America and the oppressed peoples of the world, fighting for freedom-P.166
9.   A party of the working class-1963
‘A Marxist must be the best, the fullest, the most complete of human beings-but above all, a human being.’ Page 176
10.             Against Bureaucratism-February 1963
Bureaucratism is like a ball and and chain weighing down the type of official...healthy self criticism, we must never forget that the revolution’s economic management is responsible for the majority of bureaucratic ills..Page 180
‘War on bueaucratism. Streamline the state apparatus. Production without restraints, and responsibility for Production.’ Page 183
11.            On the budgetary finance system-February 1964-published in journal of Economics
‘The socialist state uses the law of value, exercising-through the financial and credit system-control over production and distribution of the social product’ Page 200
12.            Socialism and man in Cuba-1965 letter to Carlos Quijano, editor Marcha weekly from Uruguay.

Part 3- International Solidarity
Includes 8 speeches and writings
1.   Speech to the First Latin American Youth Congress-28th July 1960-
Jacob Arnez, deposed democratically elected President or Guatemala in 1954 by CIA, given special welcome.Puerto Rico patriot Albizu Campos extended special greetings. Batista’s man killed Cuban patriot in Venezuela’
2.   The OAS conference at Punta del Este-August 8 1961.
Che greeted by thousands of Uruguayan youth on arrival at airport. Che exposed US in presence aof its delegation with proposal of ‘Alliance for Progress’
‘The Cuban revolution is invincible, because it has a people and because it has a leader like one leading Cuba.’(Page 274)
3.   The Cuban Revolution’s influence in Latin America-May 18, 1962-speech to security at Cubaa, not published till Che’s death.
Revolutions have this characteristics, they expand ideologically They do not remain limited to a single country, they expand to other areas..Page 276
Ultra leftists-or sometimes, provocateurs-try to implant the Cuban experience without thinking particularly about whether or not, this would be right place to do so...Page 278
Peru has iron-copper-other metals, Chile has copper, Argentina has uranium, Venezuela has oil, Mexico has sulphur, Congo has uranium, copper, diamonds.
Our great virtue is that we have never engaged in torture or other similarly terrible behaviour..Page 290
Opportunism is the enemy of the revolution and flourishes where people do not have control.-291
4.   Tactics and Strategy of the Latin American Revolution- Oct.-Nov.-1962-published after Che’s death-in 1968
The blood of the people is our most sacred treasure, but it must be used in order to save more blood in future-page 298
5.   The philosophy of plunder must cease-25th March 1964-Speech on UN conference on Trade in Geneva-
Unfavourable trade balance
6.   At the United Nations-1st December 1964-speech at 19th General assembly of UNO.
Exposed US imperialism, greeted liberation struggles, spoke in support of china, condemned NATO, demanded Guantenamo territory of Cuba to be returned illegal occupation by US.
7.   At the Afro-Asian conference in Algeria-24th February,1965-speech delivered at Economic seminar of Afro-Asian solidarity.
8.   Create two, three, many Vietnams-Message to Tricontinental-April  1967, published on 16th April,when Che was in Bolivia

Part 4- Letters
This section contains 23 of many letters of Cuban revolutionary war.
One letters to Editor Revolucian Carlos Franqui-snubbed him for unnecessary eulogisation.
In another letter was born in Argentina, I fought in Cuba and I began to be a revolutionary in Guatemala.-page370
The first thing a revolutionary who writes history, has to do is to stick to the truth like a finger inside a glove.-374
Advice to a father, let his son, go through that.
Letter to Maria Rosario Guevara I don’t think you and I are very related, but if you are capable of trembling with indignation each time that injustice is committed in the world, we are comrades, and that is more important-a revolutionary greetings Page376
31st August 1964 letter to President University Extension, University of Havana-while declining the offer to deliver lecture for the audience, Che snubbed him for offering remuneration for the lecture.
In a 1965 letter to childreHildita, Aleidita,Camilo, Celia and Ernesto
Che advises them to grow good revolutionary and study hard.
1965 letter to parents big hug to mother from ‘obstinate and prodigal son’
15th February 1966 letter to eldest daughter Hildita-advisesto be best in school, obey mother, good conduct, seriousness and love for the revolution...
1965 letter to Fidel Castro at leaving for Bolivia, read by Castro much later. Ends with’I embrace you with all my revolutionary fervour.
Last leeter to children fro Bolivia in 1966..
If imperialism still exists, we will set out to fight it. If it is finished, you, Camilo and I will take ‘vacation on the moon’.
Margin..To Hildita, another elephant sized kiss and tell her i will writ soon, but now I do’nt have time....