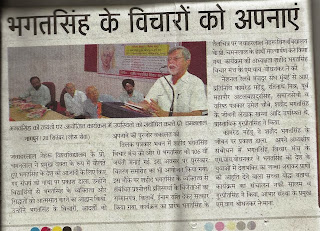 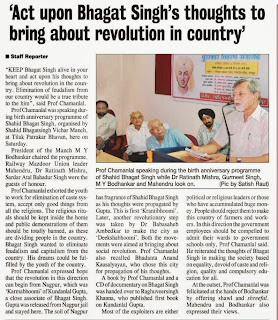 On September the 28th 1907, a boy was born in a village near Lyallpur (now Faisalabad). He would grow up to inspire the subcontinent’s youth to fight for independence from the British. The irony is that a great part of his struggle was spent in what is now Pakistan, but after partition Pakistan overlooked his legacy. This young man is Lyallpur’s forgotten hero: Bhagat Singh Shaheed.
In the midst of Ramadan, I visited Singh’s birthplace, Bangay. It is located in the outskirts of Faisalabad city. Mohammad Iqbal Virk, the man whose father was allotted Bhagat Singh’s house and lands after migrating from India to Pakistan, showed me around the property.
Virk is well-versed in the life of Bhagat Singh and has kept many books, articles and photographs of the freedom fighter. His eyes lit up as he talked of the young Shaheed, going down the road of history. At the time of his death, Bhagat Singh was only 23 years old. He was born into a well-known family that had resisted British imperialism for generations. Thus it was hardly a surprise that Bhagat Singh became a freedom fighter.
In December 1928, Bhagat Singh and his colleagues had shot dead assistant superintendent of police, John Saunders, mistaking him for superintendent of police, J.A Scott.
The previous year, nationalist Lala Lajpat Rai had suffered fatal blows at the hands of Scott and the young men wanted to avenge his death. The assassins managed to successfully escape from Lahore. Then in April 1929, Bhagat Singh and a colleague hurled low-intensity bombs into the central legislative assembly before voluntarily surrendering to the police.
The British government accused Bhagat Singh of murdering Saunders. Whilst in jail, Bhagat Singh went on a hunger strike protesting against the unequal treatment of Indian and British prisoners. He lost much weight and was disabled from taking part in his trial.
A government-proposed amendment in the law would have allowed the courts to continue the trial in the absence of Bhagat Singh. Opposing the law, and defending Singh, Muhammad Ali Jinnah said: “The man who goes on hunger strike has a soul. He is moved by that soul and he believes in the justice of his cause; he is not an ordinary criminal who is guilty of cold-blooded, sordid, wicked crime.”
After failing to make the amendment in the law that day, the governor-general resorted to issuing an ordinance that would allow a tribunal to hold what would, in effect, be a sham trial.
Various historians have said the trial lacked impartiality and objectivity. Singh and his compatriots, Sukhdev and Rajguru, were hanged in the gallows of the Lahore Jail on the 23rd of March 1931. Their ashes were cremated at the Sutlej River.
Virk said he has tried to preserve Singh’s belongings to the best of his abilities. Yet, he regrettably admits, that much has been lost due to neglect and ignorance. Pair of wooden doors that lead to the courtyard in Virk’s house in Bangay were installed when Bhagat Singh lived here.
According to Virk, Bhagat Singh planted the sprawling tree in the courtyard. Next to the tree, the Shaheed’s name is inscribed on a blackboard with white paint.
Virk says Sikhs, usually from Canada, come to visit every year and take a bit of the soil from the tree with them. Virk has also kept a bulky, and rather perky blue, safe that he says was Bhagat Singh’s own.
When the Virk family first moved into the house, the women had torn pages out of Singh’s personal book collection to utilize as fuel to cook food, not aware of the historical value of what they were burning. A little far-removed from the house, down a spiraling narrow mud path, are the lush green fields that were used for agricultural purposes by the Singh family.
Now members of the Virk family looks after these lands and Muhammad Iqbal Virk prides himself on the chemical-free ‘pure’ crops he grows on Singh’s old lands.
Bhagat Singh attended the government primary school in the village. One of the classrooms, or rather the ruins of it, is said to have been Bhagat Singh’s classroom at the school. It has only three walls standing and no roof. One of the school’s grounds has disappeared and in its place now is a pool of stagnant rainwater, breeding the dreaded mosquito. Donkeys and cows graze the other ground – the one that isn’t flooded. It is tragically ironic that the school of such a well-read revolutionary has now been left to rot, with no one aware of either its existence or the need for its upkeep. Virk asked me to request the government, through my article, to look after the school.
The role that Bhagat Singh has been assigned in Pakistan’s historical narrative is very similar to the state of public schools in the country. We do not study him in schools and he has been conveniently left out of our textbooks, as if he is a mere irrelevance – an irritant in our pious Islamic Republic’s history of benevolent Muslim freedom fighters.
The result is political leaders, engineered by the same education system, who fail to see the crucial role played by Singh in the movement for independence. The rare public representatives, who do realise his role, brush it under the rug, fearing outrage from the Islamic parties if they try to glorify a hero that wasn’t a Muslim. Bhagat Singh’s house is virtually unknown to the citizens of Faisalabad, let alone the rest of Pakistan.
The government needs to preserve the history that hasn’t yet perished from Bangay. Not only is Bhagat Singh deserving of importance but also he can be a much-needed symbol for national unity that cuts across all differences of caste, class and religion. It is time for Lyallpur to remember her forgotten son.
Posted by Chaman Lal at 17:32 1 comment: