Letter to Punjab and Delhi CM's regarding Bhagat Singh 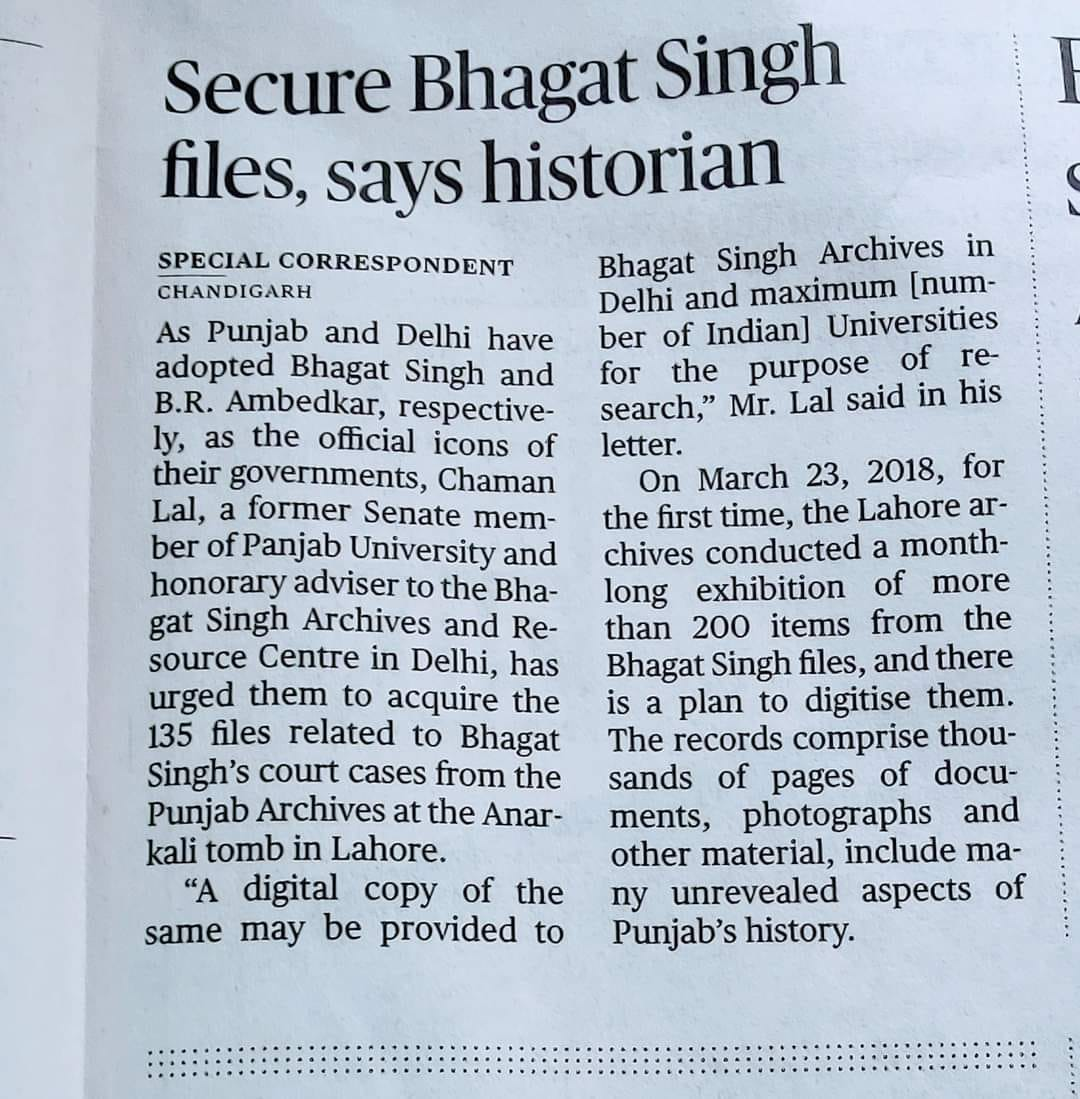 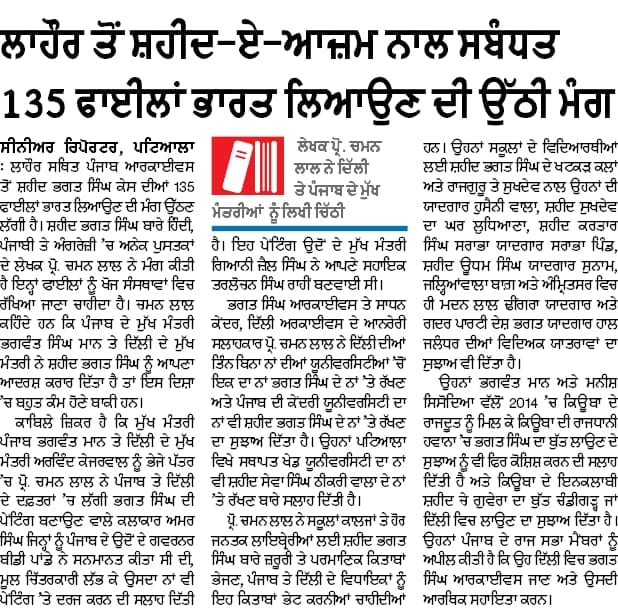 The text of the Letter

As Honorable advisor to Bhagat Singh Archives and Resource Centre, Delhi Archives, New Delhi, I have some common suggestions for Punjab and Delhi Governments, which have adopted Shaheed Bhagat Singh and Dr. Ambedkar as official icons of the two governments.

3.    BSARC in Delhi Archives and Shaheed Bhagat Singh Museum in Khatkar Kalan should have interactive relations with each other.

4.    Since the painting of Shaheed Bhagat Singh which is being used in Delhi and Punjab Government offices was got made during the time of Punjab Chief Minister Giani Zail Singh, grand uncle of present Speaker of Punjab Assembly Sh. Kulwant Singh Sandhwan, for which artist Amar Singh was honored by then Punjab Governor B D Pandey. (Photograph attached courtesy London based Punjabi poet Amarjit Chandan) . S. Tarlochan Singh former MP and OSD to Giani Zail Singh at that time, can confirm this fact. It is appropriate to acknowledge the artist Amar Singh in this regard and his initials at the painting should be highlighted from the original painting, which should be in Raj Bhavan or some other office of the Punjab Government. The original painting must be recovered from Punjab Government records and preserved as master copy for making the bulk photographs now in use in Punjab and Delhi offices.

2.  1968 first edition of Virender Sindhu Book-Foreword was written by then Home Minister of India Y B Chavan. Written by Bhagat Singh’s niece Virender Sindhu, this is authentic biography of three generations of Bhagat Singh family-from Bhagat Singh grandfather Arjun Singh to Bhagat Singh Father Kishan Singh and Uncles Ajit Singh/Swarn Singh to Bhagat Singh himself. It was published by Bhartiya Gyanpeeth then from Banaras, now published by Rajpal& sons Delhi as Bhagat Singh aur unke Mrityuanjay Purkhe. This book was translated in Punjabi by Languages Dept. Punjab, Patiala, but now not even a single copy is available there. It should be reprinted, while a private publisher has been publishing it without author or Language dept. permission and selling it.

3.  Bhagat Singh’s writings first collection in book form came out in Punjabi in 1974. Though his writings were being published from his life time before 1931 in various journals, but in collected form it came out only in 1974. It was edited by Punjabi poet Amarjit Chandan, but he remained anonymous on book title. First time 28 writings of Bhagat Singh were put together. Now Bhagat Singh nephew Prof. Jagmohan Singh edited-Bhagat Singh ate Uhna de Sathian dian Likhtan is available from Chetna Prakashan, Ludhiana.

4.  Hindi journal from Allahabad-Chand-Fansi issue with 37 articles by Bhagat Singh was published in November 1928. The journal was edited by Ramrakh Singh Sehgal, but Fansi issue as special issue was edited by Hindi novelist Acharya Chatursen Shastri, as guest editor, who had later to appear for evidence in Lahore Conspiracy case. Now available with Radhakrishan Prakashan New Delhi.

11.             Tamil edition of Why I am an Atheist by Bhagat Singh published first in 1934, the first ever translation got done by E V Ramaswamy Naicker Periyar from P. Jeevanandam. More than 30 editions published by now.

17.      Comrade Ramchandra Book- authentic history of Naujwan Bharat Sabha and HSRA of organizations of Bhagat Singh movement. Comrade Ramchandra was among founders of Naujwan Bharat Sabha with Bhagat Singh and remained its President too, was part of HSRA as well. In later life he remained MLA of pre-partition and post-partition Punjab legislative assemblies at Lahore and Chandigarh and also MLA in Himachal Pradesh Assembly. He authored three books on freedom struggle and self-financed their publications.  Punjab Govt. should publish these books as a private publisher is selling one book without author family permission.

22.             The Legend and Life of Bhagat Singh: A Pictorial biography of Bhagat Singh by Chaman Lal, expected by September end 2022 from Publication Division, Govt. of India in English.

I think is some of these suggestions are accepted and implemented, it will not cause much finances and it will prove to be more useful in spreading the ideas of Bhagat Singh, which I think is the purpose of Punjab and Delhi Governments by adopting Shaheed Bhagat Singh as official icon.

I shall be available for discussion on these suggestions as and when both Chief Ministers can spare some time together or separately.

Copy to concerned officials of Delhi and Punjab Governments

Copy to the advisory committee members of BSARC.