Jallianwala Bagh the most iconic symbol of Indian freedom struggle is in news on its reopening in a renovated form, which started a few years ago. There are few internationally known iconic symbols of colonial and imperialist repression on the people during their colonial regime in Asian, African and some other victim countries of the world. The horror saga of repression on people is not a new phenomenon, it is there since the beginning of the human society turned into political systems and nations. Slavery period was most barbaric period of mankind. Feudal period was a little less barbaric than slavery. Industrial revolution and capitalism further decreased the barbarism. But with capitalism came the powerful industrial countries, who sought the new markets with Asian and African countries mostly became the victims of colonial subjugation for these powers-especially England, France, Holland and Spain, who colonized more than hundred countries of the world. England and France were the worst. England colonized more than sixty countries in Asia and Africa and the two most barbaric colonial cruelties were committed by British colonialism-one in India in 1919 in the form of Jallianwala Bagh Amritsar massacres and other atrocities in Punjab.  Another more brutal and barbaric cruelties were committed by British colonialism in Kenya in crushing Mau Mau nationalist freedom movement during 1952-60, in which thousands of people were killed by colonial regime. The assessments vary from 11 thousand to 25 thousand people being killed. Other than colonial regimes barbarities, the most barbaric killings of Jews in millions through gas chambers were done by Hitler in Germany during second world war and Mussolini in Italy, leading to nuclear bombs on Hiroshima and Nagasaki by USA on 6th and 9th August 1945, further killings millions more people.

Jallianwala Bagh massacres in Amritsar of Punjab province on 13th April 1919 took hundreds of lives, assessments vary from official 379 to one thousand in Congress party report, apart from another 1500+ people getting injured. The people’s resentment started with making of Rowlett Bill as law in 1919. It was to suppress freedom struggle and was made in background of Ghadar Party and other revolutionary movements against British colonial regime and for the liberation of the country. In Amritsar protest was led by two eminent leaders of Congress party-Dr. Saifuddin Kitchlew and Dr. Satya Paul, both were arrested and sent away from Amritsar. There was nationwide strike on 30th March and 6th April 1919 against Rowlett act considered as black law, at the call given by Mahatma Gandhi, whose entry into Punjab was banned. Tension was rising in Amritsar. On 9th April Ram Navmi – a Hindu festival was jointly celebrated by Hindu-Sikhs and Muslims, which made the Britishers more worried and angrier. On 10th April, more than twenty people were shot dead while taking out a procession against black laws near railway bridge in Amritsar. General Dyer who was posted at Jalandhar was asked to rush to Amritsar, which he reached on 11th April. Punjab Lieutenant Governor Michael O’Dwyer gave him free hand. And on 13th April, celebrative Baisakhi day, Dyer with his armed forces entered Jallianwala Bagh, by a narrow entry path and without any warning ordered to shoot straight at gathering of about twenty thousand people, who had come to protest the killings of people and black laws. 1650 rounds were fired in 10 minutes, leaving hundreds of people dead and thousands injured. No medical aid was given and people were left to die and cry. Strict Curfew with orders to shoot, was imposed and no one could dare to render any help. Later on, Martial law was imposed in many towns of Punjab and Gujranwala city was even bombed from air. For many weeks people were made to crawl in some areas.

British government appointed Hunter commission to hold and enquiry, while Congress party had its own enquiry committee with Mahatma Gandhi, Pandit Moti Lal Nehru, Madan Mohan Malviya and Chittranjan Das like senior leaders’ as part of it. Congress enquiry committee assessed the deaths to be one thousand. Till date not more than five hundred people have been identified. British Govt. stuck to 379 death figures, while Ram Singh in his Punjabi book-The Contribution of Punjab to Freedom Struggle published in seventies, listed 406 names, which included 207 Hindus, 119 Sikhs including two women and 80 Muslims. Age range of killed were from six months old to 80 years plus old men. While Mau Mau movement descendants in Kenya filed a case in British court for compensation and they won the case. British Govt. had to pay more than 20 million pounds to descendants of Mau Mau movement and apologize too. For Jallianwala Bagh massacre they paid paltry compensation of some hundred rupees in most of the deaths and never apologized.

While Dyer died with multiple ailments in year 1927, Udham Singh took a shot at Michael O’Dwyer, the Lieutenant Governor of Punjab in 1919, on 13th March 1940 in London killing him instantl,y after 21 years of massacres of Indians. He was sentenced to death and executed in London jail on 31st July 1940. Udham Singh who used Mohammad Singh Azad as his name during trial and signed and wrote letters in this name, just had Punjabi classic poetry Heer of Waris Shah with him in jail, and not any religious book. Born as Sher Singh in Sunam, Udham Singh, who used many names in later life, was orphaned and was brought up in orphan house in Amritsar His idol Bhagat Singh had collected blood soiled sand of Jallianwala Bag at the age of 12 years very next day of the massacres. So Bhagat Singh and Udham Singh both had special focus in Jallianwala Bagh complex. But the irony is that not only ideas of both the supreme martyrs are not focused upon, their very faces have been disfigured and used in pictures and statues from painting based imaginative figures. This is rather unusual, no other political personality has been so facially changed as per political designs of ruling parties as Bhagat Singh, Udham Singh and Kartar Singh Sarabha faces have been changed.

Bagh word is a misnomer. Jallianwala was private property as a square land with no flora and fauna except some trees and a well for drinking water as was practice earlier in such places, inside the land of about 6-7 acres and was used for meetings or as resting place, being next to Golden Temple, where people thronged throughout the year. One of the owners Himmat Singh was from Jallewal village, so later on it got the name Jallianwala. After Bloody Baisakhi in 1919, a trust was formed in 1920 by Congress party, public funds were collected and the land was bought from its owners in 1923. A samadhi of mother of Sant Prakash Singh, first IG Police of Punjab Sant Prakash Singh is still inside the Bagh. British rulers wanted to turn the place into some cloth market to destroy the traces of their barbarity! Despite Congress party resolution to build the memorial, British rulers did not allow it, yet the place became a sort of memorial as people would go to pay homage to the largest number of martyrs at one place during freedom struggle there.  Jallianwala Bagh became first national monument under National Memorial Act of 1951,  the act passed in Parliament after Indian independence. Congress party President was made part of Jallianwala Bagh trust along with Prime Minister and leader of opposition and few more members as it was Congress party, who had formed the trust and collected funds from public, when the land was purchased for erecting memorial in 1923. Shashti Mukherjee was founder secretary of the trust, due to his family members were part of gathering on 13rh April 1919, third generation of Mukherjee family with S K Mukherjee continuing as secretary of the trust presently. Designed by architect Benjamin Polk and Indian architect T R Mahendran, the monument was inaugurated by President Rajinder Prasad in presence of Prime Minister Jawaharlal Nehru on 13th April 1961, which has now been renovated and extended with the amendment to National memorial act 1951 in 2018, removing Congress President from the original act of the trust, after just sixty years to commemorate hundred years of tragedy.

World over monuments to mark such historic tragedies, there are certain primary principals followed as the monument should generate the feeling of pain, anguish and anger at the time of visit. The ambience of the place is to create the impression of the event as it happened in reality; simple, sober and nothing is built to distract the mind of visitor. Does the monument like other monuments of the world-Mau Mau memorial, millions of Nazi and Fascist victims in second word war creates the impression in visitor’s mind at Amritsar? Perhaps first visualization of monument, some changes in that flora and fauna less land were necessary, like building a memorial in form of red colour few feet brick structure in centre of the land, the martyrs well, where 120 people jumped and died,  that was to be structured for proper viewing and information, to identify bullets fired with holes in walls around the land were necessary. An eternal flame was added later. Does the reopened Jallianwala Bagh comes true to above mentioned parameters of such historic monuments built in memory of great tragedies? Perhaps not, from the brochure publicized by Govt. of India rather makes the earlier structure look more unreal and unaesthetic. The narrow path has been spoiled with statues, the martyrs well and bullet marks have been polished to look fresh. The eternal flame has been moved to different place, the stone mark from where Dyer forces fired on the gathering has been made so bleak as to go unnoticed. Murals and galleries carrying pictures of Bhagat Singh and Udham Singh are distorted by using painting based saffron colour turbans on their heads, whereas Bhagat Singh and Udham Singh never wore any other colour turban than white one, which was the robe of all freedom fighters from Congress party to revolutionaries. from Such places are never renovated, these are only restored and conserved in their original shape, which is done worldwide. But the rulers in India are prone to mythologize the history by imposing their imagined history, as they have not been part of its historical process. Earlier a body called INTACH used to do conservation, now the task was given to a private company with no sense of conservation and restoration work. In the process the tragedy has been repeated again as the great sufferings of people have been reduced to farce of show business. Cry my beloved country and its martyrs! 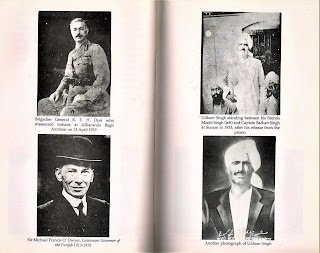 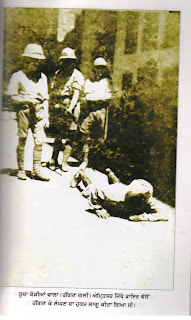 Crawling scene in Amritsar in 1919 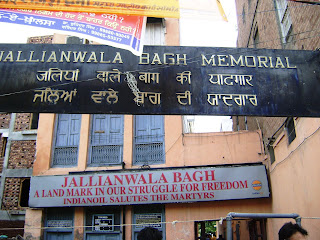 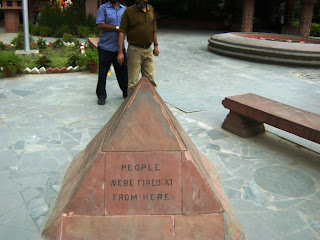 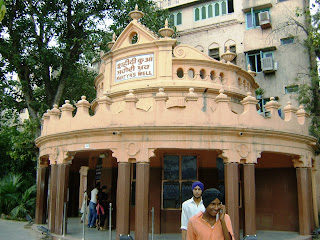 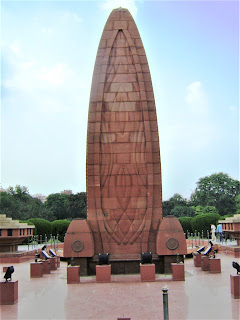 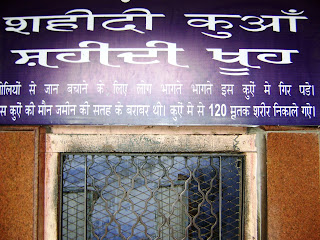 Old real pictures of Jalianwala Bagh from internet. The well as it was then 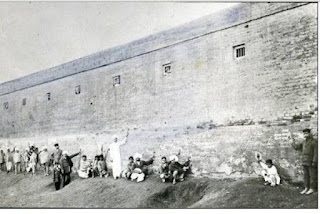 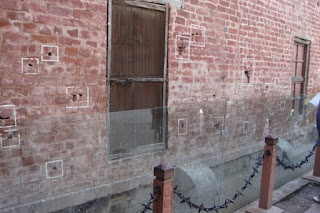 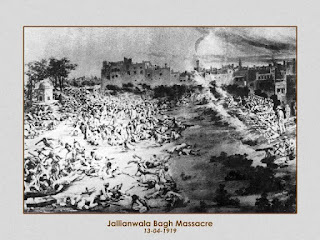 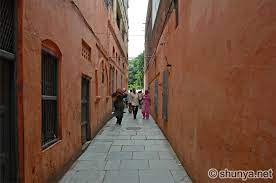 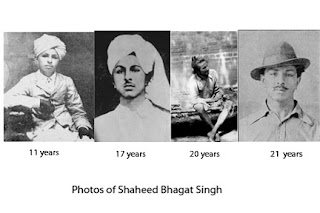 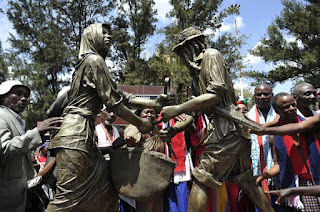 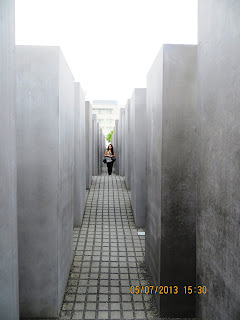